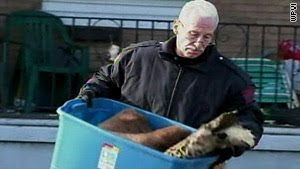 I recently read an article http://www.cnn.com/2009/CRIME/12/30/pennsylvania.animal.remains/index.html, where the Philadelphia Police and SPCA found many dead animal carcasses in a home. Obviously, this is cruelty to animals and the owner of the house should be prosecuted. However, the article on CNN seems to intimate that if there is a religious aspect to the killing of the animals, the people cannot be convicted so long as the method in which they kill the animals isn’t deemed to be cruel. What does all of this mean?

Basic criminal law principals are clear that a mens rea is required. Accordingly, if the prosecution cannot show that you had some kind of criminal intent when you committed the act, you should not be convicted.

Further, in the United States, we allow great religious freedom so long as the religious freedom doesn’t hurt other people or the government does not have a reasonable basis for precluding a person from practicing their religion. In the case of animal sacrifice, if the person was practicing their religion and the sacrifice comported with the religious tenants, the person should not be convicted.

As an aside, I have recently gotten some emails about whether you can be prosecuted for certain crimes. Understand that you can be prosecuted for just about anything. Whether your case goes to trial and you are ultimately convicted is an entirely different question. My answer to the above question is based solely on my opinion as to whether this person who killed the animals should be found guilty. Certainly, probably cause for arrest may have existed in this case depending on the reports about the malnourished dogs, etc. Arrest and conviction are distinguishable. Often the District Attorney wants the people to decide innocence or guilty, so they make the arrest and prosecution and let the jury decide the outcome.

While some of the images painted through the author of the article’s words may be grotesque to many folks, whether the acts were criminal is an entirely different issue.