I was drunk and decided that I needed to pee. I was walking home and I didn’t think I would make it. I saw a house that looked vacant, so I went to the front door and turned the knob. The house wasn’t locked. I walked in. I used the lavatory. It wasn’t a vacant house, it was adapted for overnight accommodation. On my way out I saw a vase that looked good to me, so I picked it up to “look” at it and walked back out the front door. Once I was on the front lawn, I decided that I didn’t like the vase so I chucked it behind a shrub. I walked home and passed out.

Am I guilty of any crimes?

We get a lot of questions about criminal law, but the number one question we get is, “are these questions for real or are they made up?” Someone asked this question; i kid you not.

In this example, the person does not develop the intent to take the vase until AFTER they are already in the house. Therefore, there is no burglary based on the vase. The real question is whether peeing in someone else’s home is disorderly conduct or criminal mischief, and whether those crimes can be the crime therein for a burglary. I would argue that peeing in the house IN THE BATHROOM is not a crime, so it is not burglary. 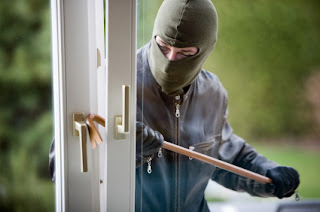